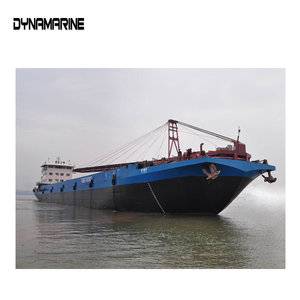 The vessel is a SELF-UNLOADING CARRIER with a deadweight of 3000t, which is designed as

double screw driven by two (2) high speed diesel engines, and one complete continuous freeboard deck and two levels of deckhouse，and the acc. deckhouse are located aft and wheel house are located fore. The vessel is suitable for carrying coal, with one consummate self-loading system, of which the coal discharging rate could be 2000t/h. And the carrier navigates in inland waterway.

The vessel is provided with two (2) cargo holds, which are abutted on each other. And continuous

hatch coaming, with a height of 3m, is provided for the cargo holds. The cross section of the whole cargo hold bottom is as V shape, One (1) longitudinal discharging hatches are arranged at the bottom P&S, conveyer belt is provided under each hatch, which could transfer the cargo to the stem, and then after one transfer to reach the transfer arm located stem. The transfer arm is 30m long, and could turn to the left and fore, and the elevation could reach 18°(which could reach 22°at the most). It finally transfers the cargo to the adjacent vessel or to the wharf which is at least 13m high above the water level.

One set of self discharge cargo control system to be installed in wheelhouse.

The control program of discharge operating condition and maintain shall be provided respectively.

motor in cargo hold will be permitted to start. Under normal stop condition, if the conveying belt motor

in cargo hold part has been stopped, the conveying belt motor on top part will be permitted to stop.

Under maintain condition, any conveying belt motor can be start and stop singly.